You are here: Home / Archives for CathedralStreet

486 Cathedral Street, Glasgow. Stewart’s bar sat on Cathedral Street between Buchanan Street and Dundas Street. In the 1870s Thomas Brown was licensee, the pub stayed in the family until the beginning of the 1900s. Margaret Brown acquired the licence in 1901 as one of the trustee’s of John Stewart. The licence was transferred to […]

274 Cathedral Street, Glasgow. The Grafton Bar. 1960s. The Grafton Bar was named after the street on the corner of the pub, Grafton Street. The first licensee to hold a certificate was a publican called Francis Anthony Mulholland Dailly, he acquired the pub in October 1909. He continued to serve the locals here until after […]

481-483 Cathedral Street, Glasgow. This old pub was situated on Cathedral Street near Buchanan Street. There has been a public house on this site since 1851. The first licensee was William Robertson who became a popular wine & spirit merchant in the area. Mr Robertson also owned pubs at 7-9 West Nile Street, 299 Argyle […] 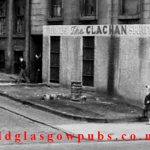