You are here: Home / Archives for GreenhaughStreet

20 Greenhaugh Street, Govan, Glasgow. In 1899 Thomas Russell was the landlord for this old established Govan howff. Murdo MacKenzie took over the business in 1918 and continued as licensee until the late 1940s. During the 1950s James Mulholland owned the pub, he also ran a pub at 31 South Portland Street. In 1962 the […] 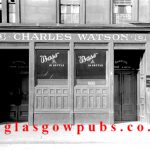