You are here: Home / Archives for Anne Ghani 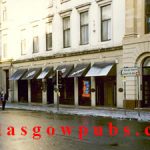 178 Ingram Street, Glasgow, G1 1DN. Demolished. Chubbie Chester’s. 1990s. This was a great pub during the 1980s, at one time there were 11 stewards on the premises. It was flooded went on fire and was soon demolished afterwards in the 90s. During the 1980s this pub was known as Zhivagos, owned by Tony Ghani […]