You are here: Home / Archives for Rutherglen

Rutherglen has a great history of auld pubs. This is a list of all the pubs in Rutherglen that we have research on. There are a lot more articles to come in the near future. If you know anything about any old Rutherglen pubs, please get in touch. 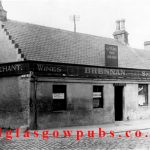 1 Chapel Street, Rutherglen. Ye Olde Inn with the licensees’ name above the door, “Brennan.” Ye Olde Inn had an established date of 1650. Before television and radio customers at the old Inn told stories and tales that were passed down to the next generation of locals, one such story was that Ye Olde Inn […]