You are here: Home / Archives for Cullen's 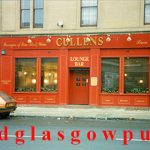 466 Paisley Road, Glasgow. G5 8RE. Tel: 0141 418 2627. Cullen’s. 1991. Over the years this pub has had many name changes. Cullens was named after owner James Cullen. The last I passed it was called the Saltire. However it was originally known as The Pavilion for many years. This was one of the very […]