You are here: Home / Archives for Address W / Wemyss Street 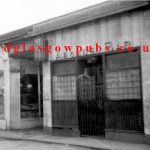 39 Wemyss Street, Queen’s Arcade, Glasgow. The Arcade Bar, 1960s. Wemyss Street was once called West Russell Street and the pub sat at one entrance of the Queen’s Arcade, an ancient shopping arcade, at the other end of the arcade you had another pub called the Camp Bar. There has been a public house on […]