150 West Campbell Street, Glasgow. G2.  Opened in the 1990s as one of the many Irish themed pub in Glasgow. Formerly the Whisky Bar and Ubar lounge which was part of the Republic Bier Halle group.

293 West Campbell Street, Glasgow. In 1892 Mr John McDougall acquired a public house from Mrs Morrison when he was only twenty eight years of age. The pub had already undergone interior alterations and redecoration when he moved in as landlord. John was a native of Islay, famed for its whiskies as well for its […] 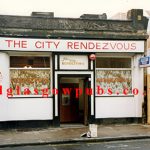 5 West Campbell Street, Glasgow. G2 6QQ. Demolished. The City Rendezvous. 1991. This old pub was established in 1854 owned by John Caldwell. In 1899 Thomas Kirkham occupied the premises paying an annul rent of £95.00, he also owned a pub in Ingram Street. When Mr E J McMonagle took over the pub he renamed […]