You are here: Home / Archives for BridgeStreet 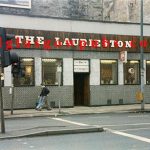 9 Bridge Street, Glasgow. There has been a pub at this site since at least 1875, Mrs Margaret Reid occupied the premises then, she also ran the Union Railway Station, licensed premises in Dunlop Street. In 1887 John G Crichton took over the premises which was then called the Old Hampden Cafe. Since he […]