You are here: Home / Archives for GorbalsStreet

81 Gorbals Street, Gorbals, Glasgow. McKellar’s Bar. 1960s. Before the tenement building was erected and the old Gorbals two storey shops and businesses were here, there was a Victualler called Daniel Innes trading from this site in the 1850s. When the tenement buildings were built the shop keepers occupied many of the shops on […] 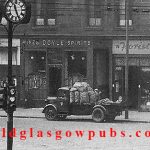 82 Gorbals Street, Gorbals Cross, Glasgow. Demolished.  There’s been a pub on this site since 1891 run by John Crawford. This well known public house was situated on a prominent site at Gorbals Cross. Doyle’s Bar was established before the First World War in 1911 by wine and spirit merchant Joseph Doyle. However there has […]