You are here: Home / Archives for IngramStreet

134 Ingram Street, Glasgow.   In the NEWS 1980… The Pub Where Kids Come First. The Most revolutionary idea in the history of the Scottish Licensed Trade is about to burst upon the Glasgow scene. I warn you that pubs will never be the same again. Sylvesters, that chic establishment in Ingram Street, opens a […]

Ingram Street, Glasgow.   The Star Inn. Ingram Street was laid out in 1781 and named after Archibald Ingram (1699-1770,) a tobacco lord who became Glasgow’s Provost in 1762. The street was originally known as Back Cow Lane. The Star Inn, in the centre of this row of buildings stretching east along Ingram Street, […]

84 Ingram Street, Glasgow. The Royal Oak, 1930s. The history of this pub dates back to 1883 when John R Stevenson occupied the premises. He also ran a small pub in Green Street, Calton. The pub was taken over by his son William in 1895. In 1914 the pub had a new landlord Andrew Donaghey, […]

68 Ingram Street, Glasgow G1 Check back soon for the history of this pub.

33 Ingram Street, Glasgow. G1 1HA. Gumbo. 2005. Gumbo was formerly the Ingram Street Fire Station. The BIG red doors can still be seen, I wonder if this was intentional. 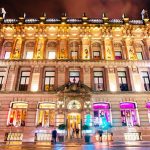 191 Ingram Street, Glasgow. G1 1DA. Tel: 0141 552 1101. The Corinthian is one of Glasgow’s high class venues. It caters for Weddings, Meetings, Seminars, Office Parties you name it Corinthian will go out and make your night a night to remember. Food is first class too, with a fabulous menu. Click here for their […]