You are here: Home / Archives for Address C / ClydeStreet

312 Clyde Street, Glasgow. Vintners. 1991. There has been licensed premises here since 1845. Wholesale Wine & Spirit Merchant Arthur B McLachlan traded here until 1868. The title above the doorway was Custom House Vaults for many years until 1881 when Melville Fraser of the St. Mungo Vintners Company took over the building. He changed […]

Clyde Street, Glasgow. Check back soon for the history of this pub.

Custom House Quay Gardens, Clyde Street, Glasgow. Spankies was opened in 1974, by partners Robert McFarlane and Brian Farquhar. Robert and Brian both lived in Cranhill, one of Glasgow’s most notorious districts. Robert was a builder and became one of the Glasgow’s most successful businessmen in the city. Spankies was named after Elvis Presley’s manager, […] 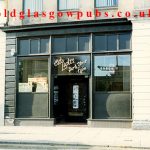 266 Clyde Street, Glasgow. G1 4JH. Closed. The City Lights. 1990s This was a short lived pub, it never took off. It was situated across the road from the Devils Advocate and Panama Jax. Do you know anything about The City Lights? If so please leave a comment. End.