You are here: Home / Archives for Other

This is a fantastic photo of Lanarkshire Licence Holders on Holiday in 1909. This photograph was taken while the group (Lower Ward Defence Association) were on a trip to Kilchattan Bay. Do you recognise any ancestors or publicans in this photo?

There is often a lot of speculation about where a pub’s name came from, especially when it isn’t obvious. A lot of pubs in Glasgow and Scotland were named after the publican that owned the pub and sometimes they were named after a local landmark or street name, but what are the meanings behind names […]

Reading through an article entitled ‘The Greatest Joke in History’ that described the joke that is the licensing laws (written in 1910). The article is a rant and a rave about the laws that are directed at public houses and not clubs. No Opening on a Sunday The article starts off with a rant about […]

Starting out on your journey to find your ancestors can be quite intimidating if you don’t know where to start. We get a lot of emails every day asking about relatives in the licensed trade and though it would be great to put together a guide to help you on your way to finding out […]

Whether you love it or hate it, non-alcoholic drinks have become a lot more common in pubs as of recent. I have tried some nice non-alcoholic cider and some very… not nice non-alcoholic beers in recent years, but who invented the De-Alcoholised process? Who Invented Non-Alcoholic Beer? In an article from the National Guardian in […] 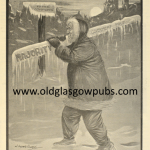